How large are the non-bank financing markets in India and Indonesia relative to other emerging markets? Non-bank finance companies (fincos) support a substantial share of around 26% and 8% of domestic system credit in India and Indonesia, respectively. India’s non-bank financing sector is among the largest by total assets of the emerging markets covered by Fitch; sector assets amounted to around $670 billion in March 2021 – second in size only to China. Indonesia’s finco industry is smaller, worth around $30 billion in total assets, but the significance and growth prospects of both geographies are underpinned by their relatively large unbanked markets.
India’s unbanked population remains the largest globally at around 230 million despite major strides in banking penetration over the past decade, according to a 2021 World Bank report. Indonesia’s unbanked population of around 100 million is also significant. 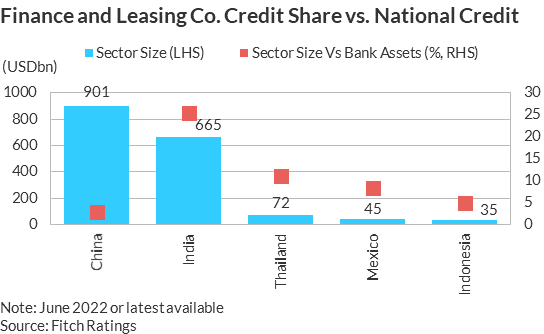 How did India and Indonesia’s non-bank financing companies perform during the Covid-19 pandemic?
Many finance companies’ core customers were among the worst hit by movement curbs introduced to combat the spread of the coronavirus. Non-bank lenders in India and Indonesia are often the main source of credit for lower-income and non-salaried individuals as well as small businesses, whose incomes were more adversely affected by retail closures and movement restrictions during the pandemic.
Finance companies were also under pressure from regulators to extend loan forbearance to customers experiencing economic hardship as a result of pandemic-related income pressures. These concessionary measures were a lifeline for stressed borrowers, but drastically reduced loan repayment collections for non-bank lenders and crimped their cashflows for several months.
Nonetheless, major finance companies in both markets were able to maintain sufficient liquidity and profitability through the pandemic. Swift action by national authorities to shore up system liquidity and support borrowers played a part in maintaining financial system stability. In addition, modest leverage and strong backing from bank or corporate shareholders for many Indonesian finance companies, and access to fresh equity capital and strengthened funding and liquidity profiles for Indian financiers, placed the lenders in a better position to weather the crisis.
How will the post-pandemic environment affect finance companies’ financial prospects?
The market’s hopes for a post-pandemic recovery have been overshadowed by supply-chain bottlenecks and geopolitical threats. These pressures have contributed to escalating inflation and tighter monetary policy across many markets globally. India and Indonesia are not immune to these challenges, but they remain the fastest-growing among ‘Fitch 20’ large economies internationally.

Fitch expects India’s domestically-driven economy and robust consumer sentiment to support credit demand and economic activity, underpinning real GDP growth of 6% to 7% in 2023 and 2024, respectively. Meanwhile, sustained commodity demand and election-year activity in Indonesia should help support economic growth of around 5% in 2023 despite dampeners from the global economic slowdown and rising policy rates.
We expect buoyant mid-teen loan growth for India’s non-bank financing industry, while Indonesia’s financing sector receivables should expand at a more moderate single-digit rate. Resilient economic conditions should help to support steady asset quality, although profitability and net interest margins will face some pressure from higher funding costs. We expect funding conditions to be sufficient to support growth in both markets, although emerging markets like India and Indonesia may be more vulnerable to liquidity volatility as conditions tighten globally.
What are the implications for Indian and Indonesian finance companies’ ratings?
We expect conditions to be largely supportive of finance companies’ ratings in India and Indonesia. Entities with lingering stocks of problem loans should encounter a broadly conducive environment to recoup such exposures or gradually write them off. This should be positive for their credit profiles.
However, ebullient growth plans may signal larger risk appetites and lead to rising leverage, if growth starts to outstrip organic capital generation. Companies may also be tempted to run down liquidity buffers as interest rates rise. Such developments may start to weaken the balance sheets of non-bank lenders, which would place pressure on their credit profiles.
Fitch’s ratings of non-bank finance companies in Indonesia are mostly underpinned by expectations of support from stronger institutional owners in times of need, be they parent banks or larger corporations. The ratings on such entities tend to be less sensitive to the underlying performance of the financing subsidiary, unless the parent’s financial strength or incentives to support the financing arm were to dim. What are the prospects for fintech and digital lending among non-bank financing in India and Indonesia?
India and Indonesia are among the most vibrant markets for digital lending in South and Southeast Asia. This is owing to their significant underbanked markets, rising internet and mobile phone penetration, and extended land masses where digital channels may be the most efficient way of reaching borrowers. Nonetheless, issues such as uneven online connectivity and unscrupulous actions by unregistered operators will slow the take-up of such services.
Nonetheless, authorities are stepping in to regulate and enforce better standards and practices within the sector. Traditional lenders are also working with digital providers to broaden their customer reach. Pure digital lending is still at a nascent stage in both economies, but we expect digital distribution to become more widespread for both bank and non-bank lenders.

Please click here for more insightful research about the finance and leasing sector.