Voluntary carbon markets (VCMs) are quickly gaining prominence as pledges to reduce greenhouse gas (GHG) emissions multiply and organisations look for ways to offset the hard-to-abate parts of their operations or supply chains. VCMs exist alongside a growing number of mandatory carbon markets in such areas as the EU, the UK, China and some US states.

VCMs allow carbon emitters to offset their ‘unavoidable’ emissions by purchasing carbon credits created by projects that aim to remove GHGs from the atmosphere through forestry, land use and carbon storage, or which aim to reduce emissions from energy and industry.

Carbon trading and a high enough carbon price are crucial to reduce GHG emissions as they incentivise investment in emissions-reducing technologies.

So far, VCMs have posed few material concerns to companies, but as prices, transparency and regulation rise, VCMs will start to have a material impact on balance sheets and pose a number of risks for buyers.

Offsets prices are low, but likely to increase

Voluntary carbon credit prices remain well below compulsory emissions trading scheme prices, due to a large supply of projects of questionable quality and often lax performance standards. However, overall prices for voluntary credits have reportedly risen by 34% in 2021 on an average yearly basis, according to Ecosystem Marketplace.

Projects with third-party certification and assurance systems, as well as those that claim socio-economic co-benefits, can generally claim higher prices. 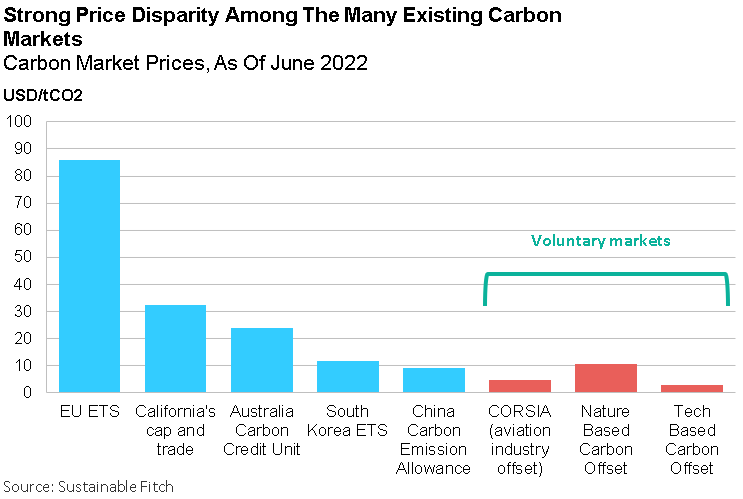 Prices of voluntary carbon credits are likely to continue trending upward along with significantly higher demand, driven by the proliferation of net zero commitments by companies and an increase in reporting.

Some compliance markets, including those in Singapore, China and California, also allow the use of voluntary credits, which should increase demand – and scrutiny of underlying projects – further. This will especially be the case for some hard-to-abate sectors, including construction, aviation, shipping and metals, for which the technology to reduce emissions is lagging, meaning that other methods are needed to make progress on decarbonisation.

Rising prices will lead to an increase in transition costs for companies, although the extent of this is uncertain. Compliance emissions trading scheme markets, such as the EU ETS, have expanded rapidly in recent years driven by expectations of tightening regulations, to a point where many energy-intensive industries have seen increased cost pressure.

This pattern should be mirrored in the voluntary market if standardisation raises costs and reduces the supply of ‘quality’ certified credits. Changes to the type of projects that are permitted under the various project criteria in development could reduce the supply of offsets, increasing prices. 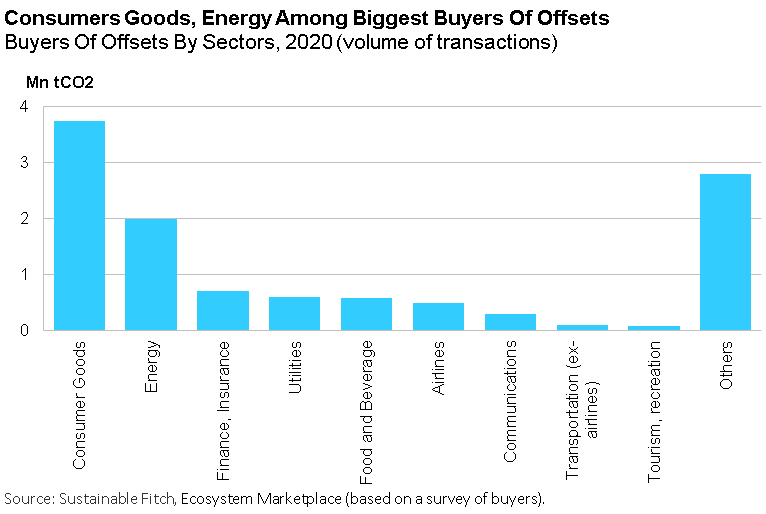 VCMs are an often opaque, fragmented and complex market and suffer from a lack of established standards.

A number of recent developments are a sign that regulation and standardisation are gradually being introduced, but they are coming from a low base.

COP26 in 2021 confirmed the role of VCMs to reduce emissions as it outlined a structure for a UN-administered system. A number of initiatives, including the Voluntary Carbon Market Integrity Initiative (VCMI) – which has support from the UK government – and the Taskforce on Scaling Voluntary Carbon Markets (TSVCM), are aiming to develop high-quality and high-integrity project performance criteria.

As companies’ reliance on credits and VCM regulations increase in the coming years, offsetting will pose a number of risks to buyers, including those relating to reputation, regulation, fraud and litigation.

Reputation risks are currently the most prominent, given the many shortcomings of VCMs. Transparency on offsetting claims from companies is generally very poor at the moment. However, the upcoming standardisation and rise in disclosure around the buying of credit (quantity, quality, the share it represents vs actual emission reductions, etc) mean that the reliance on offsets will increasingly come with risks to reputation for buyers, which could reduce brand credibility and dampen companies’ revenues.

Relying on offsets will increase scrutiny by stakeholders on the real operational reduction of GHG emissions being achieved by the buyer. Companies that are laggards in their decarbonisation strategy and which have relied too much, and for too long, on carbon offsets rather than on reducing emissions of their operations could see their credibility challenged.

The more ‘visible’ sectors, such as those which are consumer facing, could attract significant scrutiny and see most risks looking forward. These include airlines and consumer good companies, for example, which are among the fastest-growing buyers of offsets recently.

Companies relying on offsets could also be increasingly vulnerable to regularity risks, and in particular to a sudden change in offset disclosure rules for buyers, or to regulations on carbon credits and markets themselves.

Finally, the question of the quality of offsets raises risks of litigation as disclosure increases, in case companies use less reputable offsets or make misleading claims regarding their products.