The China offshore bond market was hit by a series of defaults and credit events caused by Chinese property developers in the second half of 2021 (2H2021).

Developers were virtually facing a shutdown of bond financing channels due to the significant surge in bond yields and the widening spread in coupon rates. As such, new China offshore US dollar (USD) bond issuance dropped by 11.9% to $165.5 billion for the first 10 months in 2021 (10M2021). In particular, new issuance decreased by 30% for the four months ending October in 2H2021, compared with the same period in 2020.

Developers’ default risk was heightened when most of their cash was held in project companies instead of holding companies, and when some covenants of early repayment for some non-traditional financings were triggered. Operationally, developers’ contracted sales shrank in 2H2021, and most of them rapidly reduced their land purchase spending to safeguard their liquidity.

By contrast, offshore USD bond issuance by local government financing vehicles (LGFVs) rebounded by 17.9% for the four months ending October in 2H2021, compared with the same period in 2020.

Investors’ risk aversion favored investment grade issuance from LGFVs, with the central government urging local governments to resolve the risks arising from implicit debt and the escalating debt burden. In addition, the fiscal conditions of provinces vary across regions. Uncertainty for 2022, but opportunities to emerge

The virtual shutdown of the USD public bond financings for most Chinese property developers will probably last at least into the first half of 2022.

Given that offshore investors suffered huge losses in their high yield bond investments, it may take time to restore their risk appetite enough for them to return to the offshore bond markets.

We expect investors to become more cautious when scrutinising Chinese property developers’ liquidity and financial positions in evaluating their credit and liquidity profiles, such as the unrestricted and unconsolidated cash balance, proportion of trust loan, private debt and other non-standard financing instruments in developers’ debt structure, along with any implicit or private debt.

Bondholders will also pay more attention to issuance terms stated in the offering circular, such as the minimum acceptance amount – which is usually represented as a percentage of the outstanding principal amount – for any modification, amendment and wavier of the terms, the events defined under ‘Events of Default’, and the cross-default clauses. Although investment grade issuers were relatively less affected by the credit events, their refinancing capabilities have also been undermined.

Chinese property developers will prioritise the soundness of their financial conditions over expansion. In line with this, we expect contracted sales will drop by 10% to 20% in 2022, presenting a major business risk for developers. It will hit developers’ financial and cash positions, and thus heighten the risk of their interest coverage slippage. 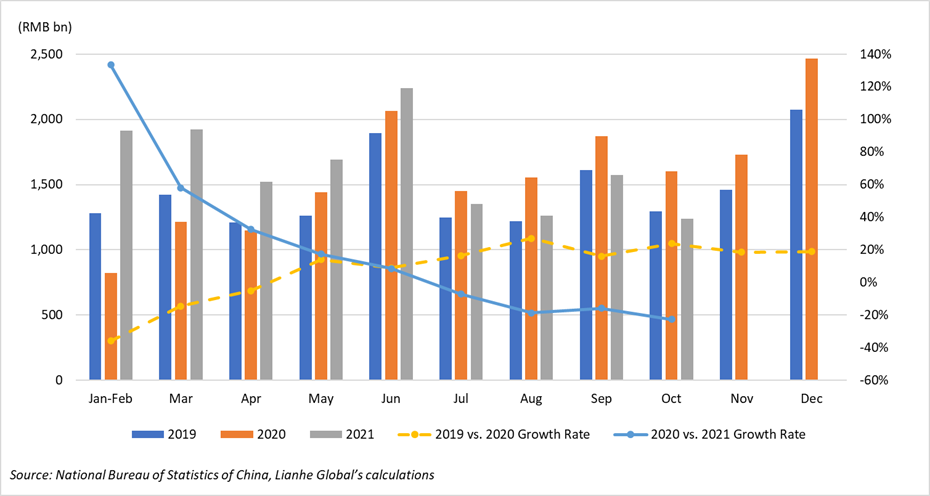 The market share of state-owned developers and some LGFVs in terms of contracted sales will increase starting from 2022, but developers will generally face challenges in maintaining sufficient land bank scale and saleable resources in 2022.

Some developers will likely seek alternatives for their financing needs, such as asset disposals, debt restructuring consolidation, private deal for bond issuance, corporate streamlining through layoff, pay cuts and other cost-saving measures. If there is no positive action from the government to ease the current situation and restore bond investors’ confidence, the risk of liquidity stress may spread to highly-rated developers.

In addition, LGFVs in regions with weak economic and fiscal conditions will face more challenges in terms of financing and cash flow sustainability, particularly some individual provinces in the northwestern and southwestern regions.

We are also concerned about the credit risk of LGFVs with heightened short-term liquidity crunch and high proportions of non-standard and/or bond financings. The actual benefits from the pilot property tax scheme remain uncertain, but the restrictions on land premium ceiling and centralised land sales revenue collection may weaken local governments’ flexibility in their fiscal conditions.